Sept 5th, 2015 after tropical storm Erika passed over Hispaniola just over a week ago it collapsed and this got me to thinking of how many past tropical systems have either missed or weakened while hitting Florida due to passing through the box below? 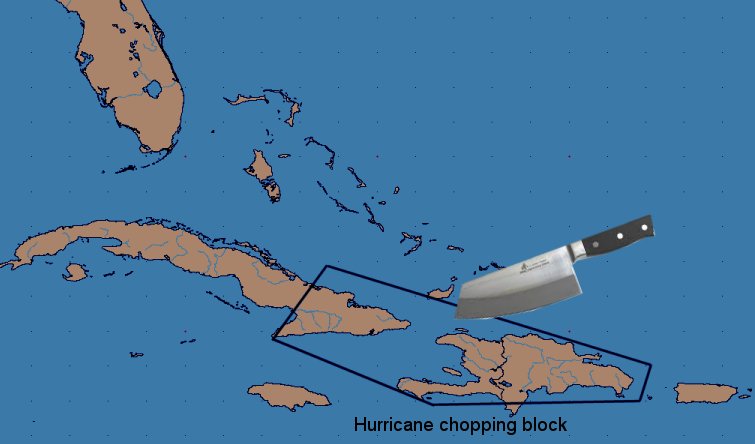 These land masses especially Hispaniola have mountains up to 10,000ft and when hurricanes pass over or very near they often weaken or suddenly change direction only to resume their previous motion afterwards. I went back 144 years going through the National Hurricane Center map archives to see how often this has happened. I picked 13 past storms that in my opinion were altered just enough to lessen the Florida impact or cause the storm to miss altogether. I tried to take wind shear into consideration but prior to the 1990s this data is not mentioned in the NHC archives so I can only extrapolate what may have happened under low to moderate shear. The list below is based on 13 subjective systems about once every 11 years on average these islands may save Florida from a hit or from much more damage.

So basically thinking an additional 6 majors for Florida with 3 potential since 1998 makes one realize how lucky Florida is to have these islands to it’s south and east. On another note there have been two impacts that may not have happened if the islands were not there, Inez in 1966 and Jeanne in 2004 may have caused these hurricanes to eventually hit Florida by radically changing courses. Most major hurricane impacts in Florida avoided this box so the next time a hurricane devastates the Greater Antilles our government should have no problem helping our neighbors to the south considering how much money and lives they may have saved…..Jim Williams