As of this post we have invest 99L in the east Atlantic with many models showing a threat to the United States down the road. Some models show an open wave others a hurricane but regardless social networks are buzzing with what could be. You see I have been tracking and commenting online since the late 90s with hurricanecity.com and even back then the forecast’s would run rampant on forums, chat rooms and live shows but as far as I know no one has died as a result. Now the tools to provide an opinion are everywhere mainly from Twitter and Facebook where you sign up and you have a platform for anyone to see. I have mixed feelings on social networks especially with the political climate we are in, is too much information or wrong information molding one’s decisions? As a hurricane tracking enthusiast I see some post’s that make me cringe like a 16 day GFS run showing a hurricane hitting Florida but lets face it the model information is out there for all to gather and post. I have observed many people I follow usually say “this is for entertainment purposes only” or “long range models are horrible” but others say nothing. If you are the first to post the 16 day GFS you get clicks, re tweets and followers because people love a crystal ball predicting their worst nightmare or wanted hurricane hit. Now the question is what can be done about it? or should anything be done about it? simple answer NO. Lets go back to pre long range models and a family has a vacation planned and does not have any idea a threat is possible in 2 weeks leaving home vulnerable or heading to the threat zone. You see most on camera TV mets will not touch a two week model showing their local market as a hit or show one on twitter so when an amateur forecaster/tracker shows it at least they have a clue. Others like The Weather Channel’s Marshall Shepard host of WX geeks makes it clear he is not a fan of weather enthusiast’s posting data that puts “lives at stake” and says there needs to be accountability, in this promo video for posting models are you kidding me?

Is the combination of social media fueling a surge of bad science? #accountability #WXGeeks https://t.co/CexVAPQpkt pic.twitter.com/t8xeITHV5Y

So what if they are not accountable? are we going to call the internet police, are we going to ban accounts? Another assumption that drives me crazy is that somehow this is putting peoples lives in danger without any example to show a weather death related to a tweet about a two week model. Listen I love the weather channel grew up with it watching some of the first on air forecast’s, I have had Dr Jeff Masters on my previous shows, love WUTV. You will never see Jeff Masters attack the amateur weather community as weather fans and amateur forecasters make weatherunderground what it is today regardless of whether they posted long range models or not. I have watched several WXgeek shows with some good guest’s but mostly omitting amateurs/hobbyist’s from the shows with subtle comments of “watch out for those reckless amateur’s” as pro mets agree with him is not a good look for The Weather Channel . I have been on the internet since the mid 1990s and have seen a lot of good material produced by amateurs and even used by the pros . So my advice to Dr Shepard embrace the hobbyist’s you may actually learn a thing or two from them, let them post to their hearts desires and at the end of the day let the Weather Channel provide the facts.

August 7th,11:30AM ET as of yesterday nearly 90% of the country’s power has been restored in the aftermath of Hurricane Earl. The category one hurricane with 80mph winds came ashore near Belize City in the early morning hours of August 4th bringing with it surge & destruction.

source Brian McNoldy Univ. of Miami, Rosenstiel School
A category one hurricane hitting Miami is quite different than one hitting Belize where some buildings especially along the coast’s are wood frame with infrastructure not as robust. According to N.E.M.O the regions emergency management agency several rivers are still flooding neighborhoods from the combination of rain and surge flooding. The NHC forecast was excellent and I doubt residents were caught off guard which is why there were no reported deaths in Belize. At 11:00 PM August 2nd the government of Belize issued a hurricane warning for Belize City based on the NHC forecast and model projections. 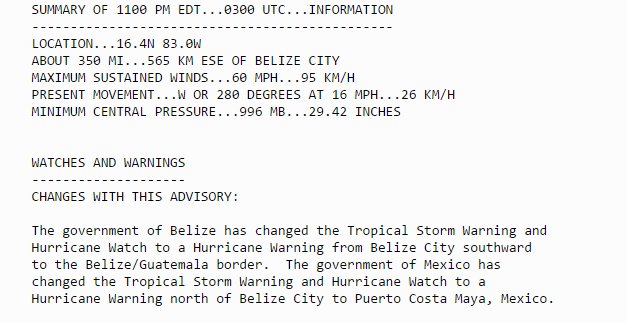 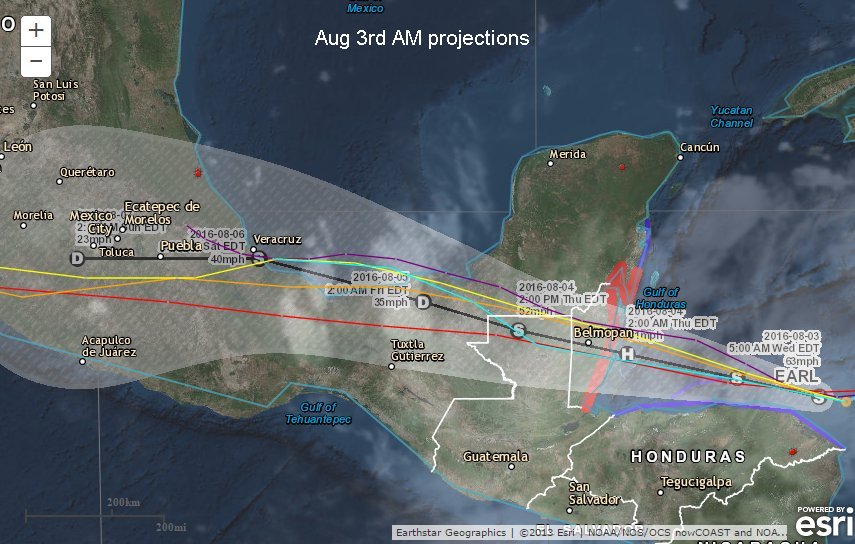 source hurricanecity.com zoomed map
The models were also showing a hit for Belize with the HWRF predicting a hurricane when invest 97L was still near the Lesser Antilles. As bad as this was the country has seen far worse with a rich history of major hurricane strikes.

The graph above shows the history of tropical systems in Belize since 1871 excluding this year, but even with many hurricane hits the country has 22 less named storms than Miami since 1871 but nearly the same percentages of Majors.

The average strength of a hurricane in Belize is 103mph with an average return rate of hurricanes every 6.86 years so for longtime residents in Belize hurricanes are no stranger. In 1955 Hurricane Janet leveled many communities as she clipped the north part of the country with 160 mph winds. In 1961 Hurricane Hattie hits with 140mph winds and a 13 ft storm surge killing 257.

The last major hurricane to hit Belize was in 2001 as Iris hit the southern part of Belize with 145mph winds and a 14 ft storm surge heavily damaging 95% of buildings and killing 31. Again back to my point as bad as Earl was for Belize it could have been much worse, by the way the average hit week for a hurricane in Belize is September 7th through the 13th the height of the season so we have a long ways to go. There have been 8 past seasons with two or more named storms hitting Belize so it is not uncommon for this area of the basin. For statistics on Belize hurricanes please visit the Belize page in the hurricanecity database…….Jim Williams