After a very active 2020 Atlantic hurricane season I see no reason that we should not see another very active season. I am calling for 20 to 24 named storms but not as many named storms impacting the U.S mainland coast as last year. My predictions for 2020 called for 18 to 20 named storms & we ended up with 30 but as far as landfall projections once again all of my top 5 were impacted. As I say every year

A city or island could be hit very hard that I do not predict, everyone in the basin should be prepared as if you are in my top 5.

In 2020 we saw several hurricanes impact Louisiana with late season Zeta hitting my #8 Grand Isle, LA as a major hurricane. My number 1 pick for 2020 was Cancun, Mexico impacted by Cristobal, Gamma, Delta & Zeta with 4 impacts I guess you could say that was pretty accurate. 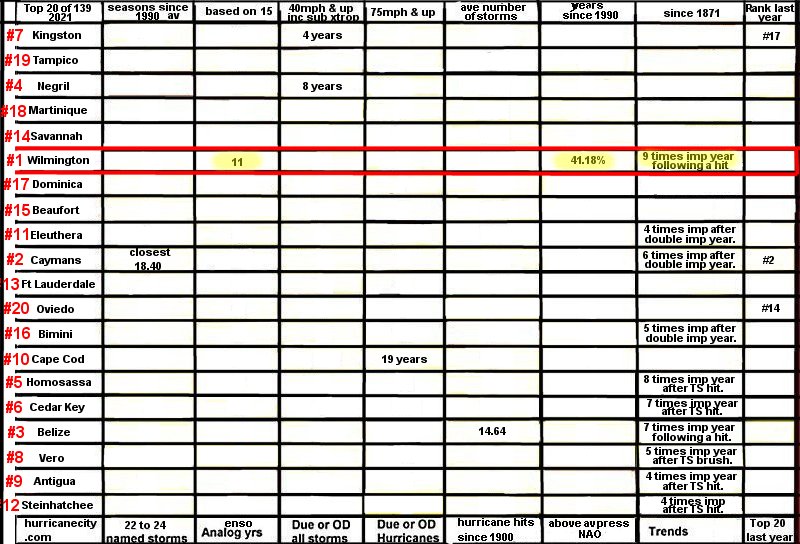 Now once the top 20 are graphed the pecking order is based on the number of columns each location wins based on the 8 criteria at the top. As you can see Wilmington, NC won the most with 3 highlighted boxes in yellow. One of the most important criteria columns is the NAO (North Atlantic Oscillation). Each year I keep track of the NAO in each hurricane season & mark it as either positive or negative at the NCDC NOAA site that keeps track which can be subjective considering some seasons can be half & half. The winner in that category was Wilmington with 41% of all hurricane seasons that they were impacted when there was a positive NAO which which will show up more than negative will this season. That was the highest percentage of all the cities in the top 20 that was calculated. To keep this post as short as possible I cannot get into the specifics on what the NAO can do to hurricane season but in a nut shell a positive NAO can lead to more ridging in the north Atlantic & less troughing.

The other cities that did not win any columns were ranked based on whoever has the highest average number of named storms when they get impacted. Based on my prediction of 22 plus named storm the higher the average the higher that city or island is ranked. The method to this madness is more than simply making a circle on a map especially a large one like many do. If you draw a circle from the Carolinas to Maine that means like 80 million are left wondering so I like to narrow it down. So without further ado here is my top 20 for the 2021 Atlantic hurricane season.

As always I like to pick a track I think may happen and a few times my tracks have been almost identical to what ended up happening. For this year I have a real concern for the big bend, Florida area with a track across from the Gulf in to the Atlantic. Of course this will not be the only track & probably not the only impacts to land. All quadrants of the Atlantic basin will be in play it’s just that I feel this particular track could be big trouble. 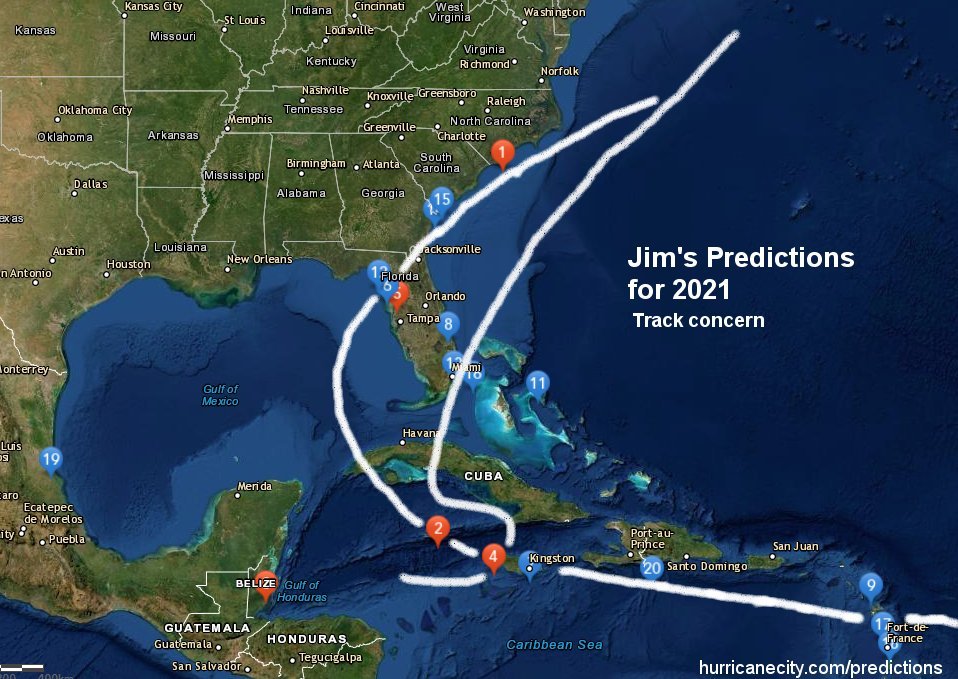 Any way that wraps it up thank you all again for the donations make your plans now and good luck this hurricane season.